Richard Kern is a New York underground filmmaker, writer and photographer. He first came to underground prominence as part of the underground cultural explosion in the East Village of New York City in the 1980s, with erotic and experimental films featuring underground personalities of the time such as Lydia Lunch, David Wojnarowicz, Sonic Youth, Kembra Pfahler, and Henry Rollins in movies like "The Right Side of My Brain" and "Fingered." Like many of the musicians around him, Kern had a deep interest in the aesthetics of extreme sex, violence, and perversion and was one of the leading lights of Nick Zedd's coined Cinema of Transgression. 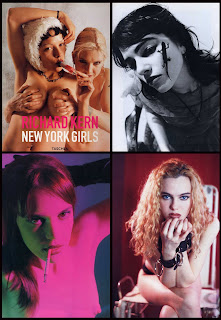 Q1. When did you start taking photographs and who or what influenced you to do that?

RK: My father was the managing editor of my hometown newspaper. We lived in a small town in North Carolina so part of his job was taking photographs of local events. He processed his own film and made prints for each edition of the newspaper. I spent a lot of time hanging out with him while he did this stuff. Two of his reporting jobs I remember vividly were a drowning and a KKK rally. The KKK rally was in the late 50s in the south so there were burning crosses and all kinds of scary stuff for me to see.
I started taking photos with a pinhole camera my dad helped me make. He showed me how to process film when I was in 5th grade.

Q2. When the underground cultural explosion in the East Village happened in the 1980's New York City was a very different place. Can NYC still be a breeding ground for that kind of pure art, such as them so-called Cinema of Transgression?

RK: New York is very different than it was back then but I’d have to imagine that it’s still a breeding ground for interesting stuff. Every new assistant i hire or model I work with here seems to live out in Bed Sty or Bushwick. I hear about things going on in those neighborhoods.
I’d have to say that one component of any artistic breeding ground is that it must contain a group of people that are fiercely competitive and New York certainly has that.

Q3. Your subject matter confronts the aesthetics of extreme sex, violence, and perversion. When I look at American Apparel's advertising I see the influence Richard Kern. Do you find it ironic that your influence has in some ways entered the mainstream?

RK: I’m flattered that you think I have in some ways influenced the mainstream. The only famous person who has told me that they were influenced by my old films was Darren Aronofsky and that was right when he was starting out. I think that the American Apparel ads were more influenced by Terry Richardson than me. Dov Charney even copied Terry’s personal style, right down to the mutton chops, aviators and supposedly putting the moves on models. Terry and I have traded many photos so I suppose we might influence each other a tiny bit. Terry taught me that it’s ok to stand someone in front of a white wall for a photo.

I love American Apparel – they’ve been sending me clothes for a couple of years to use on shoots. I’d say about 50% of the girls I’ve shot in the last few years worked at American Apparel at one time. I also ask models to bring some clothes and underwear with them to my shoots. Most of them always bring something sexy from AA. Young models usually have American Apparel clothing and (if they live in a metropolitan area) furniture from Ikea.

Q4. You shot some iconic music videos including Sonic Youth's "Death Valley 69" and Marilyn Manson "Lunchbox"-ultimately do you prefer the medium of photography or film?

RK: Both mediums are fun. Lately I’ve been working with video again. I made a couple of rock videos and a few short “art” films that relate back to the stuff I was doing with the Cinema of Transgression. One of these, Face To Panty Ratio, turned out to be exactly what I was hoping it would be. It took me 2 years to shoot and edit this 2 minute movie. I’d shoot a little here and a little bit there.
With the photography, I realize that most of what I shoot now will only be interesting to people in 20 years. So I go around with a shot list to every shoot and check off the series as I shoot them. For example, I’ve been shooting girls smoking pot for the last few years. I’ve now got enough for a little pot book.
I shoot girls taking their measurements. I shoot every model laying in exactly the same way on a bed in every location. I shoot fake class portraits. Etc etc. One day I will find a use for all this stuff.

Q5. Shock value and humor has always been a part of your work. With politicians sexting and celebrities flashing their genitalia to the paparazzi, is it possible to shock anymore?

RK: I get shocked fairly often reading The Post but it would be cool to be shocked by something new in music or art.
It’s shocking to me how hard it is not to pull out my iphone when I’m standing somewhere by myself. What did I do in that situation 10 years ago?