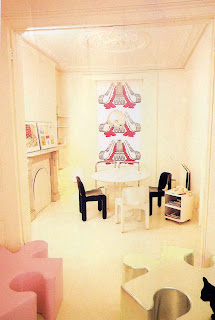 Jon Wealleans has been represented by Francis Kyle Gallery since 2002 and participated in the theme exhibition Roma in spring 2003. Exceptionally wide ranging in his choice of subjects, Wealleans paints with a bravura technique which gently subverts the realist tradition.

"In place of the unified focal length of the photographic image, Wealleans substitutes the saccades of the human eye as it surveys a prospect, zooming in and out, panning continually. This is, of course, quite like an analogue of memory itself, as it ranges over space and time. While his paintings at first glance seem fairly straightforward, on closer inspection they suck you into their golden glow of be-here-nowness." -Will Self.

Recently he has returned from a working visit to a favourite location, Hampi in southern India, and he has also been extending the range of an ongoing series of small-scale garden studies, his 'garden fragments', adding new subjects from southern France and west Africa. 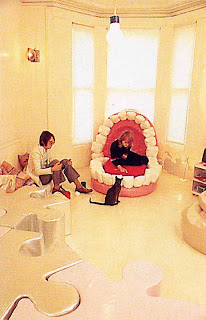 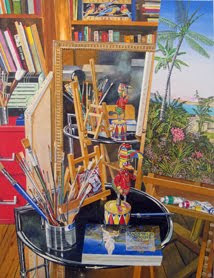 Q1 . What was the first record you bought and how did it affect you?

JW: 'C'mon Everybody', by Eddie Cochran or Johnny B. Goode by Chuck Berry. I cannot count 'The Green Leaves of Summer' that I bought for my Father's birthday present. With the first two I played just the introductions until they wore out or everybody else did. Dum de DUM, de diddy dum de DUM. I think the effect was to search for Elmore James and lose sight of Elvis. I didn't know Elmore James' name, but I knew he existed. I was very interested in pre-Beatles teenage angst music - Joe Meek produced stuff, especially English cover versions done by Marty Wilde and his ilk. I had a girl, Donna was her name - since she's been gone, I never been the same and that accurately sums up my teenage existence. She wasn't called 'Donna', she was called... Well, I'll keep that to myself. The little cow. The guitar introduction to Chuck Berry's JBGoode was a sort of litmus test of any budding guitarist's technical ability. Now pre-pubescent children can play it, so that in the original take Chuck Berry appears to be wearing oven gloves.


Q2 . How did you become involved with architecture and subsequently with the design of iconic shops like Mr Freedom?


JW: I became involved with the Mr Freedom outfit because my wife was designing T Shirts for them, and they just needed somebody a little more organised than themselves in order to facilitate a move to bigger premises. I instinctively liked Tommy Roberts. I was good friends with some fashion designers like Paul Smith and Paul Reeves and that may have helped. My memory and time get compressed. Popular culture has always been addicted to it's own past which is the reason for so much revival and retro stuff. There was just a feeling at Mr Freedom that early Pop Art and the 1950's could be little bit re-invented. 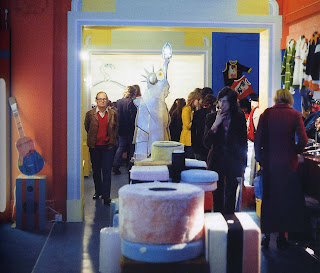 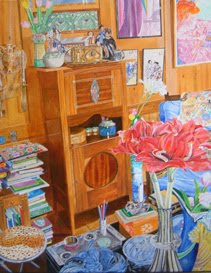 Q3. You have collaborated with rock musicians and their management, including the Elton John Organisation and Led Zeppelin. Is there a natural alignment between rock & roll and architecture?

JW: Not really although Architects would love to think so. There was a group of Architects called Archigram, who drew extremely hypothetical futuristic stuff in the late Sixties and they deeply believed that THEY were very Rock n Roll. I remain unconvinced to this day. When you met them they were just goofy nerds lacking advanced drug taking experience. Architects are a very boring breed actually and I have worked with many. I am ashamed with that alignment. I never really hung out with architects to be truthful, although their self love was temporarily intriguing.

Q4. You have devoted increasing time to painting since the 1990's. What sparked that transition from the world of architecture?

JW: Well I always just loved drawing and I still draw every day. At the Royal College of Art in the interestingly named 'School of Furniture Design',I sat next to a nice guy called Roger Dean for a term and we slightly competed. He went on to draw the fantastic' Yes' album covers. I had done some psychedelic illustrations for underground press here in London, and most of my friends were illustrators or graphic designers like George Hardie. 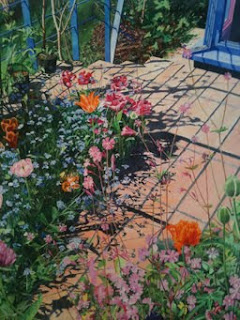 Q5. Your friend Will Self says 'the concept of ordered chaos' is intrinsic to your creative process. Would you agree?

JW: I always agree with Will. Too scary to contradict. I think he means 'ordered chaos' only in a very visually cluttered sense. I really don't have any problem with eclecticism - there just doesn't seem to be anything wrong with that, apart from the lingering guilt induced by the doctrines of 20 century Modernism. Always remember that the Nazis didn't force the Bahaus to close down because of Design Principles - they thought that flat roofs were Jewish.
It's OK to like Maxfield Parrish as well as Andy Warhol, just like it's OK to like Mozart and 'Half Man - Half Biscuit.'
Check out the latter's 'Joy Division Oven Gloves', then compare and contrast with the former's 'Serenade for 13 Wind Instruments' if you need further evidence.
Since thinking about Chuck Berry's guitar introductions, I feel an 'Oven Glove Theme' coming on. This is true. My current collection of paintings for The Francis Kyle Gallery in London has a working title of 'Orchids & Oven Gloves.

As a footnote to my 'answers' to your questions, I should have added that just prior to the Mr Freedom period, I seriously wanted to get into movie set design, and got as far as meeting an important set designer at Pinewood who was currently involved in a Bond film. He was nice and shamefully I have forgotten his name. My problem was that I only wanted to work on sci-fi films - none of that period costume bollocks. In truth, and to make things less achievable, I only wanted to work on sci-fi films that had already been made. So I wrote to Ridley Scott explaining that I knew his brother quite well, and explained how much more innovative 'Blade Runner' would have been with the benefit of my involvement. I am afraid this is true. Do you know, he never replied!
Finally, apropos my reply to your question Q6 I should add some information for connoisseurs of the half assed and mediocre. Andy Warhol was a big collector of Maxfield Parrish original artwork. How much we loathe well worn cliches, but not a lot of people know that.

...I cannot believe we have conducted this interview on cyberspace without mentioning Troy Shondell. A recording giant who made the charting record in the US and the UK of : 'This Time'
I will not sleep until you have urged your fan base to listen to Troy Shondell's 'This Time' in spite of its' faulty piano solo later immortalised by The Bonzo Dog Band. 'This time we're really breaking up' - oh yes, me and Troy definitely had a bond. Do you people have Spotify? It's high time that Troy was reassessed.

Posted by Rebel Rebel Anti-Style at 11:41 AM